Sorry, I lost my composure for a moment there.

What I meant to say was Goolin is a– fuck Goolin in the face. 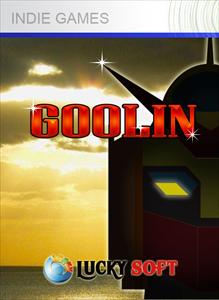 To its credit, Goolin does things that I’ve never experienced in any other game. It scores a few points for that. Unfortunately it loses all those points and more by being so devoid of all fun that it would have to go for in vitro funtilisation, or even buy a questionable batch of lab-grown test tube fun on the black market. Unusual ideas are all well and good, but what’s the point if the game is less enjoyable than slamming your own head in a pub door? While drinking Bud Light. Yes, Bud Light.

In fact, ‘what’s the point?’ is a good all-round sentiment for the experience of playing Goolin. It’s not an abrasively horrible ordeal like Who’s the Daddy?, a non-functional demo like Bit Crunch or a sob-wrenchingly unplayable sedative like Old School Destruction. It’s just…there, doing nothing, going nowhere, leering smugly at everyone as it slumps in its absinthe-soaked armchair in the corner, its head cocooned in cloying strands of roll-up smoke, B.O. and flatulence. It’s a pretentious, arty waste of space that studied Avant Garde Journalism With Interpretive Dance for seven years of resits before dropping out to live in a permanent bong haze in its friend’s cousin’s neighbour’s uncle’s squat.

Try not to be too intimidated by its awesome presentation.

I suppose you want to know why. Alright. Allow me to walk you through playing Goolin.

‘Press A’, the game informs you. Poised with your thumb over the little green nub, you wait. A large headless robot appears, and an acrobat runs at its feet. You press A. The acrobat leaps. You fail. Restart. Press A. Fail. Press A. Fail.

Try to time your press so that the acrobat will land in the robot. Fail. Fail fail fail.

Experiment. Press A, then press it again once airborn. The acrobat descends towards a capsule on the other side of the screen. Feel satisfied that you figured it out…fail. Do it again and again, and fail fail fail.

This is Goolin. You have no idea what your objective is, how to go about attempting it, or what pressing A actually does. By chance, I read a review that mentioned the key: it’s all about the number of times you press A. There’s no way of knowing what that number is; you just have to launch your acrobat into the air, try to get him on target (no mean feat in itself) and press A at random. If it fails, try again with more presses. Unless you miss the capsule’s vicinity entirely, as you probably will. 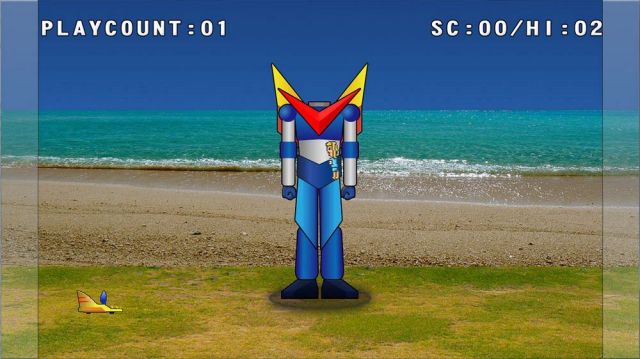 Looks pretty similar to the last pic, right? Yeah, it's just that good.

When you do, through sheer luck, land the acrobat in the capsule, it will immediately fly up towards the top of the robot…and the stupid ‘press A’ game enters round two.

It’s intolerable, but the worst part is the way the game comports itself makes it clear that it thinks it’s really clever. I could send it on its way with only a disapproving frown if it was an innocent. But it’s too knowing; too smug. Goolin thinks it’s art or an innovative, mould-breaking indie gem. It reality it’s a marginally innovative, patience-breaking heap of balls.

Damn you, Goolin. How many times do I have to press A to somersault you out of my life entirely?