There’s something very apt about that choice of words. It invokes incompleteness and despondent finality. In other words, the game is about as appealing as a plate of baked scrotum. I could leave it there, but I’m not going to. After all, what is a review for if not to dilute my own grim ordeal by foisting chunks of it off on unsuspecting readers? 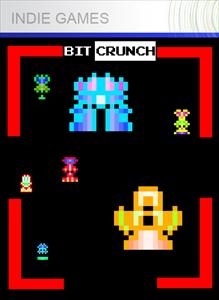 I hoped I’d like Bit Crunch. Its visuals are awkwardly charming, in the same sort of way as 30 year old photos of your your parents with big hair and humorous trousers. I quite like them, but I can’t in good conscience describe them as ‘good’. Maybe it’s the remnants of nine year old Alan reminiscing about long weekends spent sitting alone in his dad’s spare room, wrenching that joystick while cowboys and miners twitched across the screen before his red-rimmed eyes.

Atari has a lot to answer for in my childhood.

Bit Crunch goes out of its way to look like it’s on an Atari 2600. Sadly, it also plays like it’s on an Atari 2600. A depressed one that’s trapped in a loveless marriage. When looking like it was made 30 years ago is your game’s best feature, maybe it’s time to reconsider charging for it. Or even giving it away for free. Or indeed showing it to your friends. Or enemies.

Your little Atari alien/blob/person moves from room to room in search of a colour-coded key that opens a matching door, beyond which are more rooms and more keys. The layout seems to be procedurally generated, which was what first drew me to the game, but they might as well not be. Rooms are very simple and usually full of annoyingly fast enemies that swarm you and are difficult to hit with shots from your Atari-era brick catapult. But they aren’t the real obstacle between you and the randomly-placed keys. Oh no.

The real obstacles are the walls and the act of leaving the room.

Passing within spitting distance of the walls kills you instantly. It’s unclear whether they’re meant to be on fire or dripping with acid or something. From the crackling sound and irritating flickering effect I’d guess they’re meant to be electrified, but with graphics that represent everything as either a block or a line there’s really no way to be sure. I’ve opted to believe that they spray a cloud of anthrax upon contact with anyone who looks like a Kinder Surprise toy. It’s a specialist security system but apparently an effective one, and I can sympathise with the agenda.

The second major obstacle to success is simply leaving the room. Almost every room is crammed to bursting with respawning enemies that converge upon you to headbutt you in the face old-school style, and the randomised layout means you have no idea where to go and end up backtracking quite a lot. Now add to this the fact that when you return to a room– No, I can’t say it. It’s making me angry just remembering it.

Okay, I’m ready now. When you return to a room…all the enemies are exactly where they were when you left. Remember, these bastards chase you right to the edge of every damn room unless you wipe out the lot of them, in which case they’ll reward your achievement by all respawning in about ten seconds. This makes your odds of safely re-entering a room about equal to your odds of safely re-entering anything else. The atmosphere, say. Or Prypiat.

So, the quick rundown: a game that makes backtracking simultaneously essential and fatal, while surrounding you with instant-death walls and wearing wizened old graphics like they’re a fashionable hat. Not a blurb you’d want to read on the back of the box. I was tempted to escape from playing Bit Crunch by fleeing the room, but I knew it would be waiting just inside the door to headbutt me in the face when I got back. The bastard.

Bit Crunch, then, is the best game I’ve ever played. If by ‘best’ you mean ‘not quite worst’. (Which reminds me: fuck Goolin.)