I am a tactical dunce.

I can just about battle through the early stages of a turn-based strategy like Advance Wars but fall quite dramatically on my comically contorted face as soon as the enemy commanders stop taking to the field blindfolded and hung over. Don’t even get me started on real-time strategies. I got about three or four missions into Red Alert before I started crying tears of mortal terror and burning shame. Only last year, Dawn of War kicked my ass with a boot the size of a small cottage. If I had been left in command of the Light Brigade, their charge would have plunged them off a cliff before even leaving camp.

There’s a reason I’m telling you this. I want you to understand just how inept a tactician I am so that you’ll understand the magnitude of my meaning when I say Flotilla makes me feel like I’m Ender. 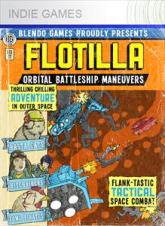 You begin the game as an experienced captain of a tiny flotilla (of course) of two spacefaring warships. You have only seven months to live before a mysterious disease/parasite/exploding moose finally saps the last of your strength/eats the last of your spleen/showers you in intestinal moosery. It’s not clear what’s going on, except that you will be dead.

As a bold space explorer and/or pirate you want to have a final few adventures before the end, so you take your pair of destroyers out into the wild vastness of space once more. This is the back story, and it’s really of no importance other than providing an excuse for your encounters and justifying a limit to the number of them you can have. A full Flotilla adventure usually runs to around the 30-60 minute mark, but they’re randomly generated so it’s easy to replay whenever you’re in the mood.

Flotilla comes in two parts. One is the framing bit, where you select planets from a map of space and speed your ships over to them to read an often silly encounter. Sometimes a haughty royalist deer will deny you entry to his people’s territory. Sometimes a crazed hippo will blindly open fire on you, or shady penguin crime lords will seek your head as payback for disrupting their operations. It’s all a bit Douglas Adams, and it’s quite charming as long as you get in the spirit. 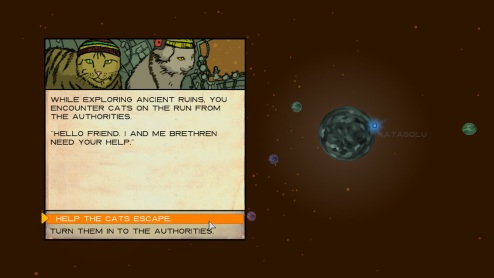 The meat of the game jars with this a bit. Defy the haughty deer, defend against the hippo, and stare down the penguins – battle must ensue. This is where the game’s subtitle, ‘Orbital Battleship Maneuvers’, comes into play. Unlike the adventuring parts, the battles are serious, strategic affairs that play out in stark orange against the depths of space, full of gauges, trajectory arcs and flat plane grids.

When I first played the trial version of Flotilla, this was what put me off. I played a one-off skirmish, and the whole thing was so confusing that I deleted the demo and barely gave it another thought. The problem is that Flotilla doesn’t explain itself very well. It’s actually quite simple once you realise what’s going on, but to a non-strategic person with only the eight-minute trial period to work it out, it might as well have been a thousand graphs of insect mating statistics for all the appeal it had. 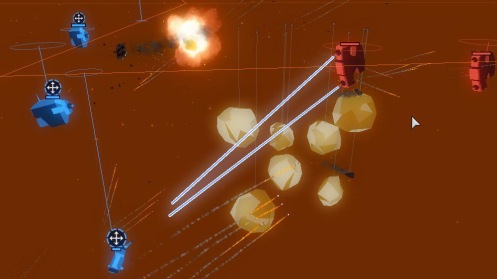 It was only months later, when someone on a forum mentioned loving it, that I went back to give it another try. Armed with a little foreknowledge about the key bits of combat, I found I really enjoyed it.

The adventure sections mostly just serve to get you into battle, along with the odd non-combat incident that gives you chance to gain more ships or trade some upgrades. The aim in each battle is to eliminate the opposing fleet, but it isn’t as simple as just landing hits on them. These engagements are turn-based but simultaneous – you give orders to your fleet, the enemy commander does the same, then all ships carry out their orders simultaneously for thirty seconds in slow, balletic near-silence.

This unusual format isn’t the only thing you have to cope with; orientation of ships is vitally important, and can decide whether yours cruise away victorious or get ripped apart. Every ship is heavily armoured on the front and top, but very lightly armoured at the back and underneath. They don’t all have the same weapons though, and some have the advantage of range while others can rip right through your armour.

True to the idea of space combat, ships don’t just power forward; they make a quick shove for momentum then spin and roll as directed, in order to present their strongest defence to the enemy.

That guy's rear and bottom are taking a pounding. Ho ho. Ahem.

To win battles in Flotilla, you must predict how your opponents will move, how fast and how far, which of your ships they will shoot at, and manoeuvre to attack their weak spots while not exposing your own.  Baiting them into moving the way you want is an effective strategy, but a risky one. More than once I’ve lost ships just by underestimating the speed of a beam frigate. Flotilla requires some thought and a little luck.

When things do work out, and you manage to obliterate the assorted anthropomorphic animals that want you dead, Flotilla hits its peak. I have had some really awful battles where I was torn apart in a couple of rounds, but I’ve also had some spectacular victories. It’s deeply satisfying to face down a fleet of five powerful warships with just two tiny destroyers, and emerge victorious with not a single casualty. This is why Flotilla makes me feel like Ender. Despite my traditionally appalling strategy skills, something in this game makes sense to me.

For people who aren’t very experienced or comfortable with strategy games, I can heartily recommend Flotilla. Don’t be put off by the illusion of complexity; once you realise that it’s all about rotating your ships to keep them safe, the whole thing becomes easy to understand. Those of a tactical bent might find the game a little easy, but there is a hardcore mode that I haven’t dared attempt, and I think the lighthearted tone of the encounters and the shortness of each complete game makes it a lot of fun for an occasional play regardless of expertise. I don’t often recommend indie games priced at 400 points, but Flotilla has earned it.

You won’t spend all day playing it, but you might find you come back every few weeks for a new adventure, and to kick a smug deer’s ass one more time.

8 comments on “There was an old man from Flotilla, who looked too much like a chinchilla…”