Regular readers might have noticed that I like a bit of randomly generated exploration. Whether it’s Cursed Loot, Mega Monster Mania, Lair of the Evildoer, Dead Pixels or the newly released Spelunky, the phrase ‘randomly generated’ (or ‘procedurally generated’) sets my heart a-flutter like I’m a chaste maiden in a period novel. It doesn’t always work out, but the sheer animal magnetism is always there.

Sushi Castle, just released by Milkstone Studios (the developer of the delightfully antagonistic Infinity Danger), grabs pretty much everything I like about randomised dungeon crawling and throws it all together. In the manner of a roguelike, you have one solitary life in which to explore as much as you can of a series of randomised floors, killing everything that moves and picking up everything that doesn’t. There are a couple of catches, though.

The first catch is that the actual control works like a twin-stick shooter. None of this turn-based walking into enemies to damage them. Instead you open fire and circle strafe like it’s Infinity Danger all over again. The second catch is that in place of huge quantities of largely interchangeable loot, you instead pick up a small number of very different items that modify your abilities. Where many dungeon crawlers have you switching from Ragged Loincloth +1 to Reinforced Pantaloons + 3 as you pick up a modest junkyard’s worth of miscellaneous brick-a-brack, Sushi Castle doesn’t.  It eschews equipment in favour of one-offs that are usually found in special rooms only once or twice per floor, like the Ninja Cloud that enables you to fly and the stodgy snack that gives you a health boost but makes you walk like you have EA’s DLC catalogue strapped to your feet.

This guy is definitely wearing Back to Karkand sandals

The upshot of all this is that while many randomised dungeon crawlers promise replayability yet offer only repetition with minor variations, Sushi Castle is genuinely hugely replayable. The differences between playthroughs aren’t just a matter of fractionally different stats on your Orcish Linguini Spatula of Flaying but real, tangible changes that alter the way the game plays out. This also forces you to be adaptable. Sometimes you might be a damage sponge with a ton of health, while other times you’ll be a glass cannon with high damage but no means of defence. Sometimes you’ll rely on bombs to deal serious damage, and other times you’ll have to make use of your manoeuvrability. You have to be able to play in a variety of styles, because you never know how your character will end up developing.

The game’s greatest strength is its most conspicuous weakness. Some attempts can feel doomed from the start if you can’t find the right items to unlock shops, or you keep picking up stat reductions through sheer bad luck. The game’s scrolls and sushi have randomly assigned effects that can be very positive but also sometimes very negative, and it’s frustrating to have an otherwise successful playthrough suddenly fall apart because you unwittingly used a scroll that filled the room with live bombs. 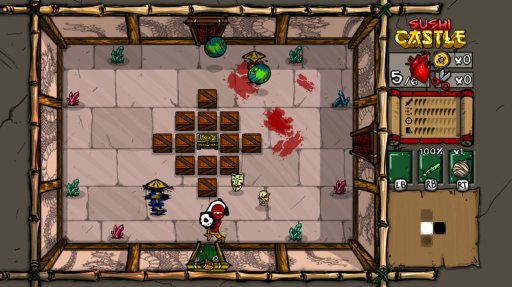 The shoulder-mounted panda, a common sight in the Shogunate armies

This isn’t a huge problem though, and the benefits of this truly unpredictable approach to dungeoneering outweigh the drawbacks. For only 80 Microsoft points, there’s a lot of play time in Sushi Castle. In principle, you can play it indefinitely without having the same experience twice. I’ve already got my money’s worth out of it with hours of play time invested, and I’m still seeing new items popping up all the time. Just to add delicious icing to the cake, Milkstone Studios plan to add new features when they reach specific sales landmarks. It’s an interesting approach that is increasingly common in indie games, and personally I find it far preferable to demanding more money in exchange for negligible additions.

Oh, one more thing. I have to mention this or my journalistic credibility badge will be repossessed and used to fund nefarious criminal activities. For better or worse, Sushi Castle is Edmund McMillen’s Steam hit The Binding of Isaac. There are a few differences – the ability to fire diagonally, some of the bosses and one or two enemy  types – but 90% of the game is lifted directly from Isaac and just re-painted. The way the game generates everything in general, its item room/shop/gauntlet room set up, its bomb/key/special item system, the enemy types, the item effects – the majority of these things are exactly the same. Sushi Castle would be stretching the acceptability of being ‘inspired by…’ to its limits. Having said that, if your computer can’t run The Binding of Isaac, or you hate Steam, or you just prefer to play from your sofa rather than a rigid office supplies chair, this might be the game for you.

I recommend Sushi Castle because it’s good fun, it’s generally executed well, and the way it handles randomised dungeon crawling means it’s still entertaining after hours of play. For the price, you won’t get many better deals. It’s just a shame that all of its qualities are actually something else’s qualities recycled, with no voice of its own.