First person shooters have become so ubiquitous, so close to the default game genre, that I have to fight off a weary sinking sensation whenever one crosses my path. Now and then they defy my torpid scepticism and turn out to be fun – Section 8: Prejudice and Battlefield 1943 spring to mind – but for the most part I’m sick of the damn things. As with so many genres, though, the hope for diversity and bold reinvention lies in the indie side of development. The early build of Shootmania Storm on PC has already begun injecting new life into the flaccid multiplayer FPS, and the Xbox 360’s Null Battles is joining that crusade.

The closest real world experience I can think of to compare to playing Null Battles is something like leaping between giant magnetic Lego bricks in zero gravity. Each match takes place in a room full of large geometric shapes, usually randomly laid out (though this is customisable from the options menu – including the coveted treasure of a genuine level editor). From your team’s base halfway up one wall, you leap out into the arena where you will automatically adhere to the surface of whichever platform you touch. The platforms being 3D shapes, this often means suddenly finding yourself upside down or otherwise bizarrely orientated. It also means that as you spring from surface to surface in the chaos of combat, your perspective will flip and whirl in a way that makes it very difficult to aim reliably. Fortunately, this is where the fun comes from.

Null Battles feels a little like the adversarial FPS games of yesteryear, emphasising energetic lunging and spraying rather than hiding behind a wall and making precision headshots. It also reminds me slightly of the aforementioned Shootmania Storm in that it simplifies weapon selection down to a minimum, and relies on the frenetic pace and unique twist to keep it engaging. 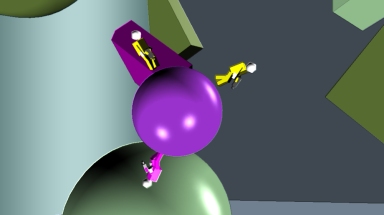 The collaboration between Genesis and Daft Punk confused audiences

You have two weapons: a laser-type gun for ranged combat (assigned to RT) and a standard short-range sidearm (assigned to LT) that acts more like a melee attack than the usual backup pistol. There is no ammunition but, as in Mass Effect, your ability to rain brightly coloured destruction upon your opponents is limited by the build-up of heat in your weapon. Continuous fire will cause the gun to overheat and leave you in the humiliatingly disastrous position of being completely defenceless for a few seconds. In a game this fast paced, having to spend vital seconds running around and whimpering like an alarmed hamster (or an unusually resolute sheep) can be fatal.

How much you enjoy Null Battles will probably be determined by how much you demand precision performance. If you’re the sort of person who derives enjoyment from painstakingly training yourself to shoot microscopic dots in their microscopic heads after aiming for only a tenth of a second, then Null Battles might annoy you. That’s not to say there’s no place for skill here, but the randomly generated terrain layout and haphazard convulsion of gravitational direction lead to a more messy and manic play style. You can’t train yourself to make crack shots reliably because you can’t memorise the randomised maps, and when you move you can’t count on being the same way up half a second later. 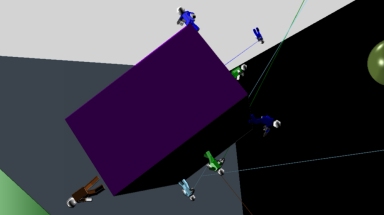 If, on the other hand, you appreciated the frantic, unfettered chaos of ‘90s deathmatching, or you just like the sound of it, Null Battles could give you much more than your 80 Microsoft points’ worth of fun.

Unfortunately Null Battles bears a heavy burden. Like many multiplayer-focused indie games, particularly on the Xbox, it runs a constant risk of suffering from lack of community. There are options for both local and online play, with options for up to four teams for real carnage, but the only way you’ll play other human beings is if you arrange a session with friends. Fortunately the AI picks up the slack here. Much as in Take Arms, the AI participants are reasonably competent and don’t behave too conspicuously unlike real people. That’s even more the case here than in Take Arms, as the erratic nature of movement around the maps means that even human players don’t behave like real people. 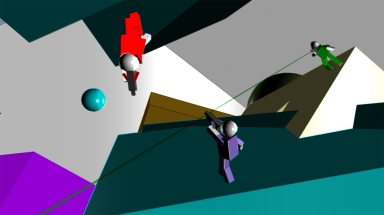 For some players, just the knowledge that there aren’t genuine gooey biological brains behind the figures they’re shooting in the face is enough to put them off. Weirdly, the same people will happily play Modern Warfare 3, which frequently also doesn’t involve much in the way of brain-driven opponents.

For those who have indie-playing friends or, like me, don’t mind playing against bots as long as they put up a fight, Null Battles is a perfectly sound purchase. It will never dislodge the big-name titles but it’s not intended to. As a 60p diversion with a novelty twist, it offers easily enough customisation options, headless chicken panic and disorientating chaos to justify a purchase. Will I be playing it a year from today? Perhaps not, but I am playing it now, and that’s enough.